I can honestly say that yesterday was the most wonderful and enjoyable day of my recent life.

It all started with the Andover parkrun. The conditions were ideal, and the company was, as usual, splendid. I was nowhere near to my personal best for the 5 km course, but that did not matter a jot. I just enjoyed the run with my friends, and a sociable mug of tea with some of them, and some visitors from other parkruns across the south, in the Pavilion Cafe afterwards.

After a shower and a small breakfast of toast, Marmite and coffee, I set off on the long drive to Grays in Essex, picking up Mello Elo along the way. As any followers of Eloise’s

excellent blog can testify, she is a most interesting person. It was a real joy to spend the day chatting, and exchanging views with her. We even helped each other with ideas for future writing. I was feeling sorry for her by the end of the day though. I was guilty of hogging the majority of the conversation. I hope that I didn’t bore her.

Anyway, when we eventually found out way to St Thomas Hall, the venue of the Southern African Empowerment and Cultural Workshop, five minutes before its scheduled start time, we were alarmed to find the hall empty. Outside, we bumped into fellow participant, Philip Wake. He seemed fairly calm, and informed us that most of the people involved made a habit of being late.

We took my box of inscribed books inside, and we made for the town centre to find ourselves some refreshment. Following some complex instructions, which deserved to be simpler, we eventually relaxed in the open cafe in the shopping mall.

When we got back to St Thomas Hall, the population had increased and everybody was greeting each other and preparing for the big event. It got under way about 90 minutes late.

Huge credit to the organisers for assembling a diverse crowd of authors, documentary makers, fashion designers, photographers, media presenters and producers, economists, and many other interested parties, including the Mayor of Thurrock, Steve Liddiard. Everybody had their chance to speak and ask questions. Good progress was made towards tangible results in the form of suggestions and actions to promote Southern African Culture in the United Kingdom. Everybody in that room inspired me and interested me. Furthermore, we all had great fun. 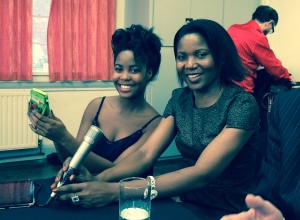 I had the opportunity to talk about Eleven Miles and how I came to write it, and I answered a lot of questions. I only managed to sell six copies on the day, so I ran at a loss, but I still felt the glow of success. After the discussions, I was interviewed on camera by the very impressive, sixteen-year-old, Katrinah Phenyo, who has read and loved Boi’s story. She is the daughter of Boikanyo Phenyo who, I am sure, is very proud of her little girl.

Eloise took the opportunity to talk about her book, Deception, and to show her children’s book, Spoilt Miranda. She captured much attention.

Boikanyo proudly showed the Mayor her recent award from the African Achievers’ Awards: She was recognised as one of the 100 MOST OUTSTANDING AFRICANS MAKING A DIFFERENCE.

We eventually got away at about quarter to eight. I was so happy to have Eloise’s company on the way home. It made our long drive a real pleasure for me. We stopped for a snack at Starbucks in St Albans and got to Bracknell at about 10 o’clock. It was gone eleven by the time I got home.

I was very tired, but extraordinarily happy. What a wonderful day!