Avoidable Tragedy – 294th “mass shooting” in the US this year

Posted on 2 October 2015 by Lance Greenfield

… PLUS the Oregon Shootings

Roseburg, Oregon shootings: How common are such attacks?

Check out this report from Rajini Vaidyanathan of the BBC, and watch the video by clicking here or on the image above.

The killing of nine people in an Oregon college is the 294th “mass shooting” in the US this year, according to one definition of such tragedies.

The 26-year-old gunman opened fire at Umpqua Community College in Roseburg on Thursday morning and was killed in a police shootout.

But how often do such attacks take place?

BBC Washington correspondent Rajini Vaidyanathan has been finding out.

Which is more dangerous in the US of A – a gun or a chocolate egg?

American legislators trust their citizens to carry guns, but don’t believe that they are smart enough to avoid choking on a plastic toy found inside a chocolate egg that sells so well for the very reason it contains . . . er . . . a plastic toy! That is really not at all funny.

To the rest of the civilized world, the USA is a very bad, very sick joke of a nation. Their President speaks great sense on gun law, but they choose to ignore him.

It is easier to buy a gun in a High Street store than it is to buy a chocolate egg. A friend of mine even got fined $25 for bringing an apple into the country in his suitcase.

Any crazy American citizen can own as many guns and bullets as they can afford.

The US government spends hundreds of billions on nuclear armament programmes in the name of defense, yet they are blind to the fact that all the nuclear weapons in the world will not deter any vicious terrorist attack or college shoot-up perpetrated by one of their own citizens.

It won’t stop attacks completely, ‘cos if some bad person wants a gun they’ll get one, but why don’t you just make it more difficult?

The State of the Nation?
My verdict: Absolutely nuts! 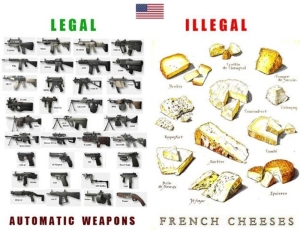 Quiz: Which is the killer? The Gun or the Cheese?