Further adventures of Tony Greenfield and sons in Ecuador in 1994.

Click on these links to read Part 1 and Part 2.

Got up at 5.30. Breakfast at 6, then out for a walk in the jungle of Mindo. We’d gone about 2km when I realised that I only had one film, so I ran all the way back to Guadual for a film and the long lens. When I got back, Dad and Oli were sitting on the roadside watching a toucan. We walked on for three or four kilometres up a good track. On the way, Oli and I caught a green snake about 18″ long and Dad photographed it. We also saw parrots, parakeets, humming birds, loads of butterflies, more toucans, some birds of prey, and some woodpeckers.

View back to Mindo

The Enriquez family (from the right: Dad, Oli, Me, Elizabeth …)

We left the main track and followed a path through the jungle. The cock on the rock had gone out for the day. We waited and looked for a while, but he was absent. We stopped to eat one of the cheese sandwiches that Elizabeth had prepared, and a Tango (Wagonwheel). At this point we noticed that our “Jungle Gel” anti-mosquito and sun block cream actually seemed to ATTRACT mosquitoes! We crossed a river and eventually found ourselves in a field surrounded by barbed wire! We sat on a log to watch the wildlife for about 20 minutes and didn’t even notice 2 cows creeping up behind us! When we crossed the fence at the top of the hill the path became indistinct so we found ourselves deep in the jungle again. It was a steep climb which led us to a woodcutter’s clearing. A large tree had been cut into good planks. These were in bundles of three and four with the remaining couple of inches between planks un-sawn. This was to allow the woodcutter to carry the planks down the hill through the jungle without letting them slip apart.

On the way down we met the woodcutter and his two dobermans. We scrambled down the hill, seeing a small tree lizard on the way, and came to a waterfall. The woodcutter re-appeared and led us past his house to the main path. We had lunch and took a leisurely stroll back to Mindo.

After supper and a shower we had a few drinks with the Enriquez family and friends. We met Eduardo (from the Banco Central de Ecuador) and his Spanish language student, Urs, who was a Swedish accountant. We drank some “Mindo whisky”. Dad went off to bed whilst Oli and I walked Luis (an Ecuadorian sergeant major) back to his billet on the other side of the village.

Returning, we met some of the friends from the earlier party at Guadual. They were now sipping Ron Cane (sugar cane rum) which they invited us to share. We stopped for a chat and had a beaker full each. It is very strong and threatened to melt the plastic beakers, but we were told that a drink called Tropico is even stronger.

Oli and I were not 100%! We had serious headaches and maybe started the day at only 10%. We drove up the track to the main road and then on to Nanagalito where we filled up. Even though it was a “proper” garage with official signs, the petrol was still brought out in a large bucket and syphoned into the tank.

The drive to San Antonio was very spectacular. On the way into the town we met a procession which appeared to be part of some sort of harvest festival. The people were dressed up in all sorts of costumes including some who were dressed as clowns. They had a brass band of ancient instruments which played a repetitive, single-phrase “tune”. We went into the “Centre of the World” village where the Centre of the World Statue is built and the equator is denoted by a line of brickwork in the paving. Oli pointed out that the Equator is only 4″ wide at this point.

For lunch we had a toasted cheese sandwich, fruit juice and coffee in a restaurant. The music was turned off, at our request, by the daughter of the house. The mother came through and switched it back on, cursing her daughter for not doing her job correctly. There ensued a Fawlty Towers type of battle which resulted in us getting our own way with the music followed by a rather interesting chat with the mother.

After lunch we drove out to the Inca ruins of Pucara Rumicucho. We were shown around by Alexandra, who explained everything in rapid Spanish. She must have explained it all very well because I understood almost half of it! We all agreed that she was a “lovely mover”. The printed explanation of the ruins was penned by the same Eduardo who we had met the previous night.

We moved on to the pre-Inca ruins of Cochasquí. The drive was about 2 hours and was extremely spectacular. On a rough road, which zig-zagged down the side of a valley, we met a scramble bike, head-on, on a corner. He was on the wrong side of the road and only JUST avoided us. I don’t know who was more frightened, us or him. When we reached the bottom of the valley Oli and I crossed a bridge whilst Dad stayed further up the hill to photograph us doing so.

Centre of the World 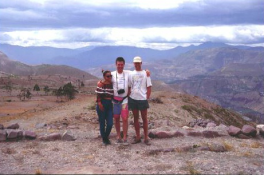 Alexandra showing Oli and me around the ruins

Oli and I wave to Dad from the bridge

Eventually, we arrived at Cochasquí, only to find that it closed at 3.30, half an hour before our arrival. However, we decided to drive on to the site and were lucky enough to be able to tag on to a tour which had just started. The guide was called Juan. He was enormously enthusiastic and very knowledgeable. Firstly, he explained about a cross which was not intended to be a religious cross but to signify the four points of the compass. However, it had been interpreted by various peoples down the ages as a religious symbol of their own religion to suit themselves. We took part in a play act – closing our eyes, repeating an incomprehensible phrase three times, then throwing a small stone over our shoulders at the shrine.

The other people in the party were a local family. One of them was called Wilson and taught English. His English wasn’t too hot though but he seemed to understand Oli’s Spanish-spattered Italian.

Juan took us up to a small compound which contained two huts and about eight llamas. In the garden there were many plants which were commonly grown in pre-Inca times and used both as food and as medicines. Juan took us into the round hut first which was used as a kitchen and had several guinea pigs running around inside it. The locals liked their meat fresh! He showed us the stones where the Cara Indians would construct a tripod over the fire on which they would hang a cauldron type pot. He also showed us the various pots and cooking implements.

We moved on to the rectangular hut, which was the living quarters. Inside there were beds of woven palm leaf and what looked like a cot. This proved to be for storing potatoes. There were also a lot of interesting garden implements, tools and musical instruments.

As we walked down to the pyramids via a rickety bridge complete with roof, we admired the magnificent view. Juan said that it was possible to see the whole of Pinchincha Region from this site – a huge overstatement methinks!

The first pyramid which we came to had been excavated by Germans, who had exported all the most valuable gold and silver to Europe. Nevertheless, it was very interesting when Juan explained the purpose of the two circles which had been excavated. The larger was a Solar calendar to time the passing of the year; the smaller was a lunar calendar which timed the passing of the quarter. Juan took us on to show us a 3-D model of the site. Some of the pyramids had ramps up to 100m long which were used by processions during religious ceremonies.

The museum was closed but we were able to see a vertical excavation about 15m deep into a pyramid, which clearly showed that it had been built up over a very long period of time.

Juan didn’t want any money for the tour, but we pressed S/-10000 on him and gave him a lift home for his efforts.

The trip back to Quito was fairly uneventful. We had to stop to help Wilson and his family who hadn’t realised that they had a slow puncture. We were deliberately running the petrol tank low, so were a little worried when we got slightly lost on the way to El Cafecito. We dined at an awful steak bar where the tables rocked and the service was bad. The wine wasn’t too bad though.