It started pouring down just after breakfast. This was the day of our “long trek”, but we waited until 9 o’clock to see if the weather would break. It didn’t. Off we went down the river but we saw nothing. All life, except human life, was wisely sheltering from the rain. It didn’t stop raining until one o’clock and even then there were intermittent showers. 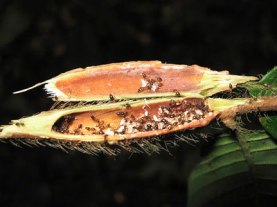 The highlight of the morning was the discovery of the tree which houses the lemon ant. These trees seem to adopt a natural clearing. The lemon ants live in a bulbous area of the stem just below the leaf. When the tree is growing this houses an aphid. Once the aphid matures and vacates its temporary home, the lemon ant moves in. It has a small entrance/exit at the bottom end of the bulb. We all had a taste, and they were very nice and did taste of sweet lemon. When we eventually stopped for lunch we had spam and cheese rolls followed by biscuits with a choice of tuna or guava jam. Some of us had a combination of cheese, tuna and jam on biscuit, with a liberal sprinkling of lemon ants. Lovely!

During the walk we crossed a marsh about 300m wide. There were logs and rotting vegetation just below or above the surface all the way across but it was difficult to balance in the slippery conditions. We all had sticks to aid us. Everyone except Oli and I fell in along the way, including the guides. Sonia fell in about 10 times, letting us know with characteristic shrieks.

A little further on, Innocencio found an area under a tree where a deer had slept. Oli was convinced that the guide would return that evening to stock his family larder with venison. He was probably right. On the tree we found a very large, furry caterpillar. it was about six inches long. Having had my stomach painfully smothered in caterpillar hairs in Nairobi a few years before, I decided that we should leave it where it was. Tapir tracks were abundant in this part of the jungle and they were all quite fresh, but we had very little chance of seeing one with our noisy Chilean friend in the party.

Towards the end of the walk we swung on some long lianas, which was great fun. I jumped off the first one, attempting a flip as I dismounted, but slipped in the mud and broke my snake stick. I did manage a couple of very muddy somersaults though.

After supper Oli and Dad went off to bed. The other party were going off in the boat to look for caimans with their guide. Laura. Sonia and I were the only ones from our group who joined them. Laura sat in the bow. Behind her sat Sonia and a lady from the former East Germany who had been a Russian language teacher but was now learning Spanish in order to teach it. Then came me and Klaus (from Frankfurt), then Klaus’s Frau, then all the rest. The three in the front were chatting and giggling until Klaus and his Frau got very upset. “You muss keep quiet! It is useless to see anysink if you vill make zoh much noise!” He was quite correct. We didn’t see anything until we were coming in to the jetty from our hour long paddle. It was then that we saw the red eyes of a caiman reflecting our lights about 10m from the lodge.