We had to get up at 3.45 am for breakfast at four. Having said our goodbyes we headed of back up the river to Coca. Despite all the rain, the water level seemed lower than when we’d made the outward trip, so we had to do much more traversing. The current was against us and the trip took about six hours. We had two comfort stops and very sore bums by the time we arrived at Coca. It was very cold and raining most of the way. 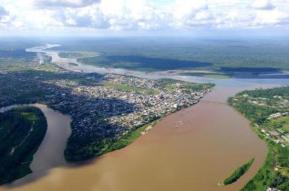 At Coca we were taken by the rickety bus to the airport. Toasted cheese sandwiches, with mild, soapy, Ecuadorian cheese, were taking about 20 minutes to cook, but we got one each eventually. The plane was about one hour late.

As we flew into Quito, I could follow the road which we’d taken from Cochasquí to Quito just a few days before. The taxi from the airport to El Cafecito took an excellent, traffic-free route which ran parallel to Avenida Amazonas before cutting through the back of Avenida Colón.

We retrieved the clothes which we’d left behind and gave a large bag of washing to the maid before leaving almost immediately to confirm our Iberia flights back to Madrid and London. We took the opportunity look into a few souvenir shops while we were out. Oli was undecided between an alpaca rug and a Panama hat. He would also liked the idea of taking a large, man-sized, balsa parrot home with him. I also liked the parrot, but couldn’t think of any place to put such a huge beast in our current house. I was sure that Joy would prefer the rug if I could afford it.

As usual, we became quite hungry, so we headed for the Magic Bean for enchiladas and fruit juice. Then it was back to El Cafecito for a shower and a bit of rest. The plumbing had been (sort of) fixed, so Oli and Dad had warmish showers. I managed ½ minute of cold shower before the water completely stopped.

In the evening we went down to Reina Victoria for a pint of Newcastle Brown. What a surprise – they didn’t have any! Instead we had some awful German lager. Oli beat me twice at darts – once at 301, and again at Round the Clock. 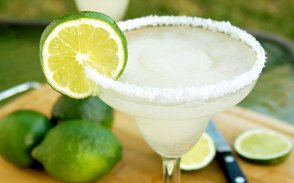 The Flying Dutchman had been recommended to us for a curry and Indonesian by David. It was closed, so we went down to Big Dave’s Taco Factory for a taco and a couple of Margaritas. Big Dave is also known as Humungeous Hugh, Man Mountain Malcolm and Gigantic Jim (you had to be there!). He always looked as if he’s about to burp. He is 6’3″ and Texan and has an Ecuadorian wife who is about 4’9″. She does the food, he does the Margaritas. The food menu is a single page. The Margarita menu is a book. Big Dave takes a tiny taste of every Margarita he mixes. If it doesn’t hit the mark, it goes straight down the drain. The tacos were excellent.

Author of books for children and teenagers

Ocado, the online supermarket. Have a question? Please see ocado.com/coronavirus for the latest FAQs Drop us a message or post in our timeline – Contact us form: ocado.com/getintouch