Breakfast of fried eggs, lousy coffee and juice, and toast with guava jam. We walked down the 3 km track to Bahía Tortuga (Turtle Bay). Along the way we saw a few [Darwin’s] finches and lava lizards and discussed Oli’s schooling. The sand on the beach was fine, silver, coral sand and was absolutely beautiful. The sea was quite rough and it was drizzling but we enjoyed the walk along the beach in the company of the pelicans and finches.

We came to the bay itself, which was very placid and quite shallow. It was protected by a natural peninsular. We chose our spot then went for a swim. I used the snorkel but didn’t see much. I put some suntan lotion on and lazed around while Oli went for a short walk before joining me. Dad was content to sit and read his book. 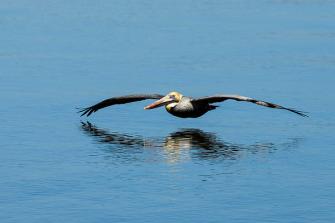 Later, Oli and I went along the peninsular to watch the marine iguanas and lizards. It’s amazing that you can sit within a couple of feet of these wild creatures and they still come towards you. At this point Oli realised that he was beginning to burn, so we went back to put some lotion on. We decided to wear our shirts for additional protection. The walk back along the beach and path gave us some good opportunities for more photography of the iguanas, lizards and pelicans.

It struck me that, although pelicans are such clumsy, clownish birds when they are walking or swimming, they are magnificent and graceful when they glide along a couple of feet above the surface of the water.

Back in town we headed straight for the west end where we had our fill of fish, chips, salad and bread. Siesta ensued for Oli and Dad; journal-writing for me. Oli’s skin came up like a beetroot and he looked like he was in great pain.

In the evening we went to Las Cuatro Lantinas for a couple of drinks and met Jaquelina who had chatted up Oli in her shop the previous day. She took us up to a classy restaurant called La Casa de Phillippe. We met the owner and settled down to listen to the good, live guitar music. Oli and I had lobster tail and Dad had fish in sauce. With the drinks, coffee and music all added to the bill it came to S/-105,000 (£32). This was our most expensive meal in Ecuador and it was not well cooked, which was disappointing. Still, the restaurant was very nice with good music and atmosphere. I beat Dad at pool, after a struggle, and had an interesting conversation with a Bavarian. My Deutsch is much better than my Spanish.

Dad and I left Oli with Jacquelina and went back to our room. Oli came in less than ½ hour later, having failed in his quest to go home with Jacquelina. I’d come to the personal opinion that she was a bit strange anyway.