Posted on 24 August 2016 by Lance Greenfield 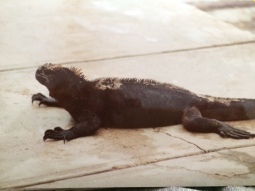 We got up at 4.45 and were ready for the bus at five. At 5.30 it still hadn’t come, so I walked across the road for a coffee with Jimmy. The others stayed in the room. The bus turned up at 5.45 and did a tour of Puerto Ayura picking up the other passengers. On the way to the ferry point in the north of the Isla Santa Cruz we made the acquaintance of three Californian children and their mother. The kids were called David, Rachel and Sacha. The mother was called Mom. We got to the ferry point at around seven o’clock and were taken straight out to the boat, the Viking, in an inflatable dinghy.

It took three hours to get to Isla Bartolomé, passing the islands of Daphne Major and Minor soon after leaving. we saw lots of frigate birds and blue footed boobies around the boat during this part of the voyage. About half way between the Daphnes and Bartolomé, which is a small island off the coast of the much larger Isla Santiago, we were joined by some dolphins. They took great delight in swimming just under the bow of the Viking, making occasional leaps out of the water, and sometimes turning on their backs. Some of them had large scratches on their backs, presumably from getting just a little too close to the boats. Sea lions posed within a few yards of the boat. Sometimes they would swim fast alongside the boat, just like the dolphins, but most of the time they would just float on their backs and wave their flippers at us.

On arrival at Bartolomé, our guide, Franklyn, took us ashore at a small jetty. There were lots of red crabs around the landing area and a few sea lions. Dad was very seasick. He had stayed below with the engine fumes and with no view of the horizon for the entire trip despite our sound advice to join us on deck.

Oli and I had been up on deck with the American family. Apart from the excitement of the dolphin episode, we had also been served breakfast by Franklyn and had been well entertained by the jokes and songs of the children. We contributed a few of our own. They liked the one about the aeroplane engines breaking down. I taught them My friend Billy and Mom didn’t mind too much. They proceeded to tell Oli and I a few mildly dirty jokes.

Frankly took us up to the 110m summit of the island. Most of the way there were wooden steps and platforms. The landscape was laval but there were cacti growing and locusts and lava lizards in abundance. Franklyn showed us the two types of lava. One had reached c.1200°C and was very solid, the other had only reached 800°C and was aerated. There was a great view from the top where we found a survey pillar. I showed Oli a ground mark which is used to check the position of the pillar. We could see a couple of sandy beaches on the island and Franklyn said that we’d be going there next for some swimming with the penguins and sea lions.

On the way down the frigate birds came close enough to attempt some photography. I won’t know how successful I’ve been until we see the results, but I was trying to capture the silhouette of their glide, and the deflated red sacks of the males. We could also see some Galápagos [Humboldt] penguins swimming in the crystal clear sea below us. These are by far the most northerly penguins.

Dad had stayed at the bottom of the hill and was feeling a little better after the administrations of several sympathetic passers by.

The beach was only a few hundred yards away. Oli and I dived off the boat and swam ashore. The snorkelling was fantastic. I saw shoals of large (18″ – 2’) blue and yellow fish, cigar shaped fish with yellow, longitudinal stripes, yellow zebra fish, and black fish with yellow and orange fins. There were two types of sea urchins, one with spines and one with chimney or finger looking spines. David found a “sand dollar” which is a sea urchin which is flat, round and about 5″ diameter. When it is alive it has a star-shaped formation of very short, fine spines on its yellow top side.

I made the mistake of lending my snorkel and mask to a New York couple who couldn’t get used to the snorkel, so separated it from the mask. Unfortunately, they didn’t notice the small piece of rubber which kept the two parts together. Later Dad felt more able, so went snorkelling for a while. I swam back to the boat for a T-shirt to protect myself from the sun. As I swam back to the beach, the rest of the party left in the inflatable for the Viking. I asked Oli to throw me the snorkel, which he did. It landed a few yards short and immediately started sinking. I dived after it, caught hold of the snorkel, and surfaced. Unfortunately, the mask continued its journey to the bottom. David helped me look for it, but to no avail. I borrowed his mask, and, with my snorkel, continued to look while the rest went aboard for lunch. Eventually, I saw my goggles, dived down 10-12 feet to get them, and surfaced, blowing my snorkel clear. When I recovered my breath, I realised that 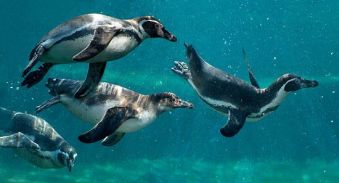 I had blown my snorkel tube out completely and was left with two pairs of goggles and a mouthpiece. “Time for lunch”, I thought. The goggles are the expensive component and a tube is hardly worth looking for.

Lunch was meat stew and rice. Following lunch we departed for Isla Santa Cruz. It is worth mentioning the amazing antics of the sea lions and penguins. Whilst we were swimming in the bay, these creatures were swimming amongst us. They were coming so close to us, and really showing off. One penguin swam past Oli about a foot in front of him. We thought it was making an attempt to peck off his serpiente de pantalones!

The sea was much rougher on the way back. Dad took our advice and sat on the foredeck in the fresh air with a full view of the horizon. He didn’t get sick, but got cold, wet and sunburnt about the legs instead. Oli and I sat right on the bow most of the way back, hoping for more excitement with the dolphins. The waves provided us with ample excitement. Sometimes we’d be violently splashed as we plunged off a peak into a trough, and from time to time we’d actually be knee deep in the Pacific, only to be hauled back into the air as the Viking rose on the next wave. We saw no dolphins, but we did see several sea lions.

As we approached the Daphnes the engine gave out, and the crew spent the next ½ hour fixing it. During this break Dad bet me a Greenfield Research pen to an ASK Group pen that Daphne Major had two cones. Although it looked like a single cone to me, a read of the guide the following day proved him to be correct.

We came into harbour at 6 o’clock at the same time as a small fishing boat. This gave us the opportunity to photograph the pelicans and boobies which were following the boat in hope of an easy supper. The journey back across the island in the dark was very forgettable, so I can’t possibly describe it.

After taking showers we put faith in Oli’s choice of restaurant once more and went to one just 50 yards down the road. This time his judgement was good. We each had a steak. Mine was covered in pineapple sauce. The others had mushroom sauce. Oli and I had helado mixta to follow. We were in bed by 9.25, and Oli and Dad were asleep by 9.30.

Blog: lancegreenfield.wordpress.com email: lancegmitchell@outlook.com I published my debut novel in December 2014: Eleven Miles. My second novel went live in February 2016: Knitting Can Walk!
View all posts by Lance Greenfield →
This entry was posted in Ecuador, Personal and tagged Ecuador, Galapagos. Bookmark the permalink.