Posted on 6 September 2017 by Lance Greenfield

On vacation in Kefalos on the island of Kos, there was always a struggle to decide where to eat and what to eat. One evening, I was sitting in Maria’s Bar, listening to the usual conversations. I used the time to write te following, which some might consider to be poetry. I know that my attempts at poetry are pathetic, but it amused me at the time and I hope that it manages to raise a few chuckles amongst my blog followers.

Wherever we go, there’s always a groan.

Then there’s a moan,

Followed by yet another groan.

Has the spinach pie got cheese in it?

Cheese in the spinach pie?

Do the prwns in the prawn cocktail need peeling?

Yes. They are very fresh.

How about trying our pasta?

So I don’t want that!

It wasn’t much good last night.

But that was in a different restaurant.

Well, order it without the egg.

Yeah! I’ll have that!

Then I’ll have English steak without the egg.

May I have English steak without the egg,

But with extra mushrooms and onions?

Just promis not to moan or groan.

Our dinners were served.

There was too much cheese in the cheese pie,

And he never asked me how I wanted my steak cooked.

Was it cooked well?

Yes. It was well done, but that’s not the point!

And I’m not sure that there were extra mushrooms!

Especially as it was washed down with half a carafe of house red. 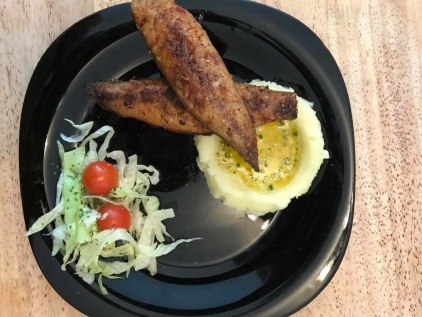 No moan, groan, moan from me!

1 Response to Dinner in Kefalos