Posted on 11 February 2018 by Lance Greenfield

We couldn’t believe it. We had always played football. We were fitba’ crazy! In the past two weeks, the Lisbon Lions of Celtic had won the European Cup and Rangers had been runners up in the European Cup Winners’ Cup.

Under the watchful eye of Mister King, we played football during physical education lessons. Every break time, we played it in the playground. We played with a tennis ball rather than a football. I suppose that controlling the small ball improved our skills. It was certainly a fast game. We always kicked a ball around the streets on our way home.

Within minutes of getting home, we were all changed and down by the sea wall, playing “past the post.” We played until the sun was going down.

On Wednesday, at assembly, the headmaster had announced that there would be no more football at school. The local authority had banned it. With immediate effect, the main sports would be rugby and hockey. All fixtures against other schools in Berwickshire had been cancelled. They were all banning football too.

We laughed. This had to be a joke, right?

At first break, the teacher confiscated our tennis ball. We sat on the wall, under a cloud of gloom. Hardly any words were exchanged.

When we got to the gym for our P.E. lesson, there were no round balls. “Rugby today, boys,” said Mister King, producing six egg-shaped balls and tossing them to us before leading us out onto the field.

We were distraught. Our hearts had been ripped from our chests.

But we were not so easily beaten. We would NOT be defeated.

Some bright spark suggested that Eyemouth and all the nearby villages could form teams which could play matches on Saturday mornings. We could organise it all between ourselves. We’d sow them!

Being only ten and eleven years old, we’d have to rely on our parents to transport us around or, at least, give us extra pocket money for bus fares.

Luckily, when we took our idea home, most of our Mums and Dads were enthusiastic. Many were unhappy about the way that the education authority had taken away one of the major passions in our lives. They wrote letters.

“They boys will jus’ be gangin’ aboot, vandalising bus stops and smashin’ folks’ windies,” was a typical comment.

My Eyemouth friends and I got together outside Giacopazzi’s. The pokes of chips were the best you’ve ever tasted. And we’d wash the feast down with a pint of milk from the vending machine. Maybe the school would be banning fish and chips next! It was a terrible prospect.

We needed a name for our team. There were lots of crazy suggestions. We’d been studying Scottish literature, so it wasn’t long before we’d narrowed our choices down to a short list of two: “The Ivanhoes” and “The Black Arrows.” Davey had suggested, “The Tam o’ Shanters,” but we all thought that was just a wee bit too scary.

Eventually, we had a vote and we settled upon “The Black Arrows.”

With another flash of brilliance, we came up with the idea of playing in white T-shirts on which we’d draw large, single diagonal black arrows across the chest using thick, felt-tipped pens.

The next morning, at school, the rest of the newly-formed Black Arrows team were delighted and excited when I told them that my Mum was going to buy white t-shirts for all of us AND she would help us to draw the black arrows on them. 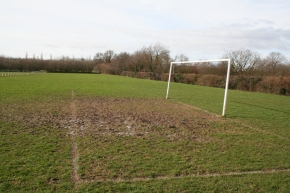 So, the next Saturday morning, the Eyemouth boys travelled to St Abbs and lined up, on a muddy field, in our smart new shirts. The Black Arrows won that game by eleven goals to nil.

On subsequent Saturdays, we travelled to Coldingham and Burnmouth and other surrounding villages. We won every game we played. We never lost a game. We never even drew a game. We were invincible!

Our Saturday morning league lasted less than a year before the education authority reinstated football in Berwickshire schools. Throughout that period, we, the Black Arrows, maintained our winning record. Not even the famous FC Barcelona managed that!

To this day, I believe that the Black Arrows are the only team in the world with a one hundred percent record. Beat that, if you can!

What heart speaks out