In the last two weeks, I have been for two interviews, both with the same company, in London. I very much hope that I have been successful, as I love their technology and I think that the company culture and the people are great. I am worried that I didn’t perform to the best of my ability but we shall see. I’ll hear their decision by the end of next week.

However, that is not the point of this post.

On both occasions, I walked from Waterloo Station, along the South Bank, across one of the many Thames bridges, to the company’s office in Bishopgate, and back. That experience reminded me that London is a glorious kaleidoscope of culture, language and cuisine. It is a wonderful city! 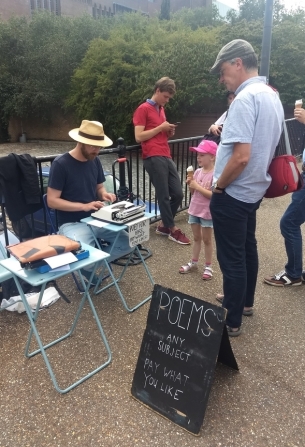 On my way back from my second interview, I had just passed the Globe and the Tate Modern, when I encountered a poet called Luke. He was sitting on a collapsible chair, behind a collapsible table, typing on an old-fashioned typewriter. Yes! A typewriter! It was just like the one that I used as a Squadron orderly corporal in the Royal Engineers back in the seventies to type out the daily orders.

Luke was selling poetry. He had signs up, offering to write poems o any subject for whatever the passing public were willing to pay.

I stopped and had a chat with him. I liked him. He had just completed a poem, to order, for a young American couple. It was about twenty lines long. In response to their request. He signed the bottom of the piece of paper. After a short discussion, the young man gave him two fivers.

Business was steady. With his permission, I took this photo of him for my blog.

The short encounter with Luke filled me to the brim with happiness. He is doing something that he enjoys. He won’t make a fortune but he is happy. So am I.

4 Responses to Poetry for Sale